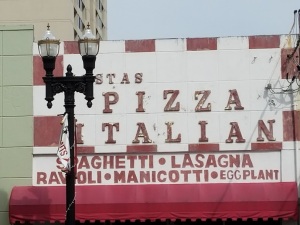 1053 Park St
Jacksonville, FL 32204
This restaurant has been in this location for as long as I can remember,  the sign in the window  celebrates 40 Year Anniversary.  It would appear that nothing has been done inside or out in all that time.

Interior a combination of booths and tables,  a mish mash of bad wall hangings, old posters and fliers cover the take out and pay desk.  It could benefit from some dusting and clean up.  If it’s this messy in the front of the house, I was having shivers thinking about  what was going on in the kitchen, 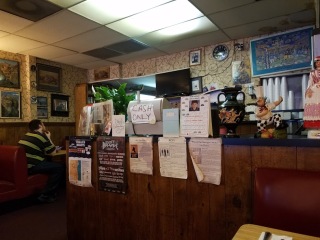 The single waitress was equally as unkempt and disengaged. Our big mistake was not leaving and going to any of the other restaurants just steps away. Two things to know going in  Cash Only, no beer or wine but you can bring your own, for a small corkage fee.

The menu is pretty basic, almost too basic,  after a quick look, it was clear the choices were Meat Sauce or Alfredo for the pasta, several Baked Combo which I avoid , Eggplant, Ravioli, a few different Pasta offerings,  Veal,  Chicken   and a Steak dish.  My normal dish is just plain Linguine with Olive Oil and Garlic  sprinkled with hot pepper flakes, but tonight I had a craving for Chicken Parmigiana , my second mistake.  My friend also not feeling the love went with the Spinach Ravioli, and Meat Sauce.  Both of these dishes included garlic bread and house salad.

A sad combination of Iceberg, white onions, jar or canned olives  We chose the home made Italian dressing.  Same low quality oil used on the bread, I ate the olives.

The moment of truth, the arrival of the entree,  my side of pasta arrived first,  Small plate of flaccid  spaghetti, heaped with the thick meat sauce.  Nothing about this dish was appealing, and tasting the sauce confirmed the same.  Heavy large chunks of green peppers, onions and mystery meat. Pasta could not have been freshly cooked, just by the fact it arrived so quickly and was barely lukewarm.

The Ravioli arrived looking as unappetizing as my pasta.  Heaped on the plate, the thick sauce overwhelmed, cheese, stringy and hot.  According to my friend the  pasta itself was okay but she was not a fan of the sauce either.

The Chicken Parm arrived piled on the plate with no thought to presentation, covered with the thick meat sauce.  Why anyone would put a Meat Sauce on Chicken defeated logic.  The chicken not a nice breast pounded down and lightly breaded, no these were thick chicken strips, not a speck of breading or flavor normally associated with this dish.

We did not take any joy from this food, both of us left most of our dinner. The only positive, the price, we both made it out for under 15.00$$ each with refillable drinks.

So our or my take away, I have eaten in many Italian restaurants  around the world, and this was by far the worst meal  I can remember. Uninspired dated food  and bad service, I can’t recommend this to my readers.  But I always encourage,  give it your own test run, and make up your own mind.  I do not always order the best thing on the menu, will always return a second or third time to make sure it was not me. There will be no return visits here.

Tagged as: Cash Only, Dinner, Groups, Hole in the Wall, Lunch, Street Parking, Take Out